William S. Carsley, 93, of Comstock, died on Thursday, August 19, 2021 at Care and Rehab-Cumberland. He was born July 27, 1928 in Cumberland, WI to Leslie and Grace (Hummel) Carsley, and was raised on a dairy farm in Comstock. After graduating from Cumberland High School he served with the US Army in Germany as a Corporal with the heavy field artillery. He was married in Cumberland on November 26, 1952 to Avis Cook, and they farmed the family homestead on Crystal Lake and raised four children together. Bill worked for a short time at 3M 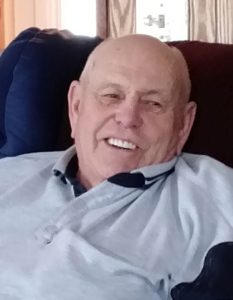 , then, after selling the herd, he worked at Seneca Foods seasonally, was a Barron County volunteer driver and later worked as a bus aid for Cumberland School District.
In his younger years, he enjoyed roller skating, dancing and snowmobiling. Later, he spent time outdoors hunting, driving through farm country admiring the crops, and meeting the guys for coffee at McDonald’s in Turtle Lake. He had a quick wit, loved reminiscing about old times, and listening to classic country music.
Farming was his passion, and he shared that with neighbors who helped one another during harvest time, leading to life long friendships and a close-knit family. Bill was blessed to live nearly all his life on the family farm spending time with his loving wife, their children, grandchildren and great-grandchildren, sharing his stories and experiences. The staff at Cumberland Care and Rehab became very important to him in his last few months.
He is survived by sons: Dave Carsley of Barronett and Bob Carsley of St. Croix Falls; daughters: Barb (Dave) Jansen and LeAnn (John) Lombard, both of Comstock; grandchildren: Jason (Nova) Carsley, Emily (Greg) Shockley, Zachary Carsley-Thompson, Caitlin Carsley, Kelly Gooden, Adam (Anna) Jansen; great-grandchildren: Kason, Brynn, Amiyah, Kynlee, and Ensley; many nieces and nephews. Bill was preceded in death by his wife, Avis, in 2012; infant son; sisters: Betty Carsley, Jean Bezecny, and Alice Jansen.
Funeral services will be held at 11:00 a.m. Friday, August 27, 2021 at First Lutheran Church, Cumberland, with Rev. Timothy Schmidt officiating. Burial will be in Lakeside Cemetery, Cumber- land. Pallbearers are Jason Carsley, Emily Shockley, Zach Carsley-Thompson, Caitlin Carsley, Kelly Gooden, and Adam Jansen. Visitation will be one hour prior to service.
Skinner Funeral Home of Cumberland is serving the family.