Thelma Lorraine Klugow passed away on Friday, January 7th, at the Cumberland Care and Rehab, in Cumberland Wisconsin, at the age of 98 years, 7 months, and 11 days.

Thelma (Espeseth) Klugow was born on the family farm on May 27th 1923, near Prairie Farm.  The farm was located about 4 miles north west of Prairie Farm on Hwy P.  She was number 10 of 11 children.  Esther, Clara, Clarence, Ella, Carl, Helen, Ben, Marie, Mable, Thelma and Doris.  She could recite all of her siblings names in order up to her death.

Their big old farmhouse had two bedrooms upstairs and one down stairs for their parents.  Thelma talked about numerous girls in the larger bed room (several per bed) and the boys in the smaller room.  All running down the stairs in the winter to dress in front of the wood stove.

Her father Gilbert Espeseth was not only a farmer but was the area assessor for many years.  Her mother, Emma (Faanes) Espeseth, was a very busy housewife raising 11 children, and one grandson, Dale Ritter.

The Faanes farm was just south up the hill from their farm, so they had lots of relatives near them.

A tornado touched down on the farmstead, when Thelma still lived at home, doing some damage.  This caused Thelma to be very afraid of thunderstorms the rest of her life.

Thelma attended Breen School through the 8th grade, which they walked back and forth to.  She attended two years of High School at Clayton, because Prairie Farm did not have a high school at that time.

After high school, she worked at a small restaurant in Clayton.  At that time, she met Willard (Bill) Klugow who worked at the International Harvester place in Clayton.  They married in November of 1941.

They lived on Bill’s parents farm, near Turtle Lake, until Bill was drafted into the Army Air Corp to Texas.  (Now called the Air Force.)

Thelma went back to her parent’s farm, and awaited the birth of their first son, David, who was born in Sept of 1942.  After Bill returned from the Air Corp, they farmed his parents’ farm, as his parents had moved to California, and his Dad worked for the Peterbuilt, making parts for the war effort.

The farm was sold several years later, and they bought a home on Horseshoe Lake, where they lived for a number of years.  During those years, they had two more children:  William Leroy in 1948 and Charee Ann in 1954.  Willard did carpenter work, and was one of the men who built the parsonage at Zion Lutheran church in Turtle Lake.  He also worked with the Erickson brothers, who built Erickson Station Stores all around the area.  He built an Erickson station in Turtle Lake, and they owned it for several years.

Thelma worked at the New Frontier Restaurant, as a waitress for a number of years, and in 1967 they bought Kings Café, in Turtle Lake, which they owned for a few years.  Bill had a brain tumor, and after surgery, he was unable to work, and they sold Kings Café, and moved to Dillion Montana.

Bill had gone to the seminary in Springfield, Illinois for 3 years, to be a minister, and while in Montana, did several fill-ins for Missouri Synod churches.  So they lived in several towns in Montana. Later, they divorced.

Thelma lived in Colorado for one year, and then moved to Dawson Creek British Columbia, Canada, where she worked at the hospital as a dietary aide for 11 years.

In 1988, she moved back to Wisconsin, and she and Bill Klugow got back together.  They were remarried in November of 1988.   They lived in the Danbury and Webster area, until Bill’s death September of 1998.

In 2010, she moved back to Turtle Lake, and lived in the Elderly Housing, until 2018 when she moved into the Cumberland Care and Rehab, in Cumberland.

Thelma outlived all of her siblings.  She is proceeded in death by her parents, Gilbert and Emma Espeseth; 10 brothers and sisters; husband Willard Klugow, and son  William Klugow in 2007,

She was preceded in death by her parents, her 10 sibilings, her husband  Willard Klugow and her son William Klugow. 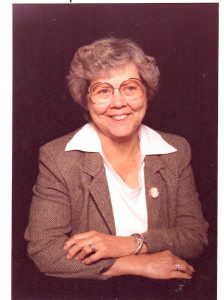