Elsie Johnson turned 100 years in January, 2021. Elsie was born in 1921 in Polk County, Wisconsin. She graduated in 1939 from Amery High School. In October of 1943, she and Donald Johnson were married. They farmed in Rice Lake and then moved to Illinois. Later, in March of 1957, they bought a farm in Johnstown Center, Wisconsin, where they raised registered Holsteins. Throughout her lifetime Elsie has seen the first Miss America Pageant, Prohibition, the Great Depression, Jackie Robinson, Pearl Harbor, the Holocaust, first man in space, the first Super Bowl, the Civil Rights Act, Three Mile Island, 18 presidents, the moon walk, landing on Mars, automotive travel, airplane travel, radio and television, computer, internet, 911, all the wars, plus more events than could be listed. Don and Elsie celebrated their 60th anniversary before he passed away in 2004. They have six sons, many whom remain in this area, 16 grandchildren and 13 great-grandchildren. Elsie is a member of Good Shepherd Lutheran Church in Janesville and was actively involved in her church  Anyone that knows Elsie says she is an absolute pleasure to know and her smile and wit continue to shine. 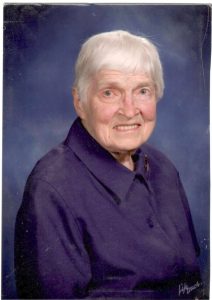 Wish her well as she begins her next 100 years.