Two people were injured in a single vehicle rollover at 1654 20th Street, four miles northwest of Turtle Lake, in Polk County Thursday morning, March 26.
The driver, Timothy Cook, age 20, of Rice Lake, was operating a 2004 Toyota Corolla northbound on 20th Street when he failed to negotiate a corner and traveled into the ditch. Cook was ejected from the vehicle as it left the roadway and traveled into blowdowns from the July storm. Emergency personnel were forced to cut their way through the downed trees to reach Cook. Cook was transported to Cumberland Memorial Hospital by ambulance.
A passenger in the vehicle, Kayla R. Stence, 28, of Rice Lake, was partially ejected but managed to escape the vehicle and was discovered walking to a nearby residence. She was also transported to Cubmerland Memorial Hospital for injuries sustained in the accident.
Cook was cited for operating without a valid license, failure to keep vehicle under control and operator failt to wear seat belt.
Stence was charged with passenger fail to wear a seat belt.
Responding to the scene was the Polk County Sheriff’s Department, Turtle Lake Fire and Police Department and Cumberland EMS. Davis Auto Body removed the vehicle. 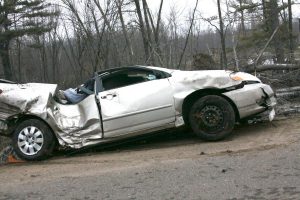